What exactly is Literacy, and why is it so important?

The Compact Oxford English Dictionary defines Literacy simply as: the ability to read and write.

It goes without saying that this is indeed a useful skill. It does not venture to add anything about the quality of that ability, its depth, breadth or authenticity. But then it is the Compact edition. Most would agree that literacy is more complex than an application of reading and writing skills for basic life needs.

Wikepedia sheds some light with:

The term’s meaning has been expanded to include the ability to use language, numbers, images and other means to understand and use the dominant symbol systems of a culture.

When it comes to children’s experiences in their schooling years, the ability to read and write undoubtedly defines, very early on, the quality of their learning, their relationships with peers and teachers,  sense of themselves in the world and their self-esteem. They may not be able to manage the level 5 home reader but they sure do understand that it’s not the level they are supposed to be stuck on. Strong literacy skills are rewarded on a daily basis and by default, those who feel they don’t possess them, can feel isolated, and become bored.

We probably all know of, or may have been ourselves a student who “fell through the cracks” at some point during our schooling, becoming overlooked by teachers, believing themselves to be mediocre at best, and in turn pursuing more interesting activities like trying to get paper spit balls to stick to the ceiling of the classroom, or carving broody adolescent messages into desktops.

Despite a National psyche in which the work ethic, productivity, and success is deeply embedded, when we follow statistics, we will find that Australian children do suffer from compromised literacy skills, and this is actually a problem in our culture.

According to Better Beginnings:

Figures from the Australian Bureau of Statistics show that 44% of Australian adults don’t have the literacy skills they need to cope with the demands of everyday life and work.

This is an isolating and disempowering experience for individuals living in a culture that is becoming increasingly divisive.But what to do about it? Do children need to start reading earlier? Practice more? Practice harder?

There are many schools of thought on the processes of teaching a child to read and at what age to begin. Before we had children of our own, a work colleague of my husband’s recounted to us his daughter’s natural gift for the English language. She was, he claimed, reading at the age of one. Not being parents yet, what did we know? So we respectfully leant on the back foot and nodded, in dutiful awe and amazement.  Afterwards however, we just couldn’t shake the image of a one year old pawing over The Herald while being spoon fed mashed banana. Parents or not, this was not a possibility we were willing to accept. 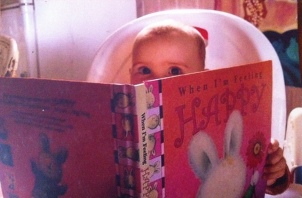 As many are aware, there are pedagogies such as those developed by Rudolf Steiner, in which reading prior to the age of 7 is not encouraged, and current studies which point to the negative effects on the development of the brain when the structure of language is installed prior to the natural development of senses, spontaneous play, creative thought, and lateral thinking.

And even if the whole of the Waldorf/Steiner education model is not accessible, or comfortable for families, the basic tenants are still worth considering.

New Scientist points out, that while countries like England, Australia and the US are beginning formal education earlier and earlier, in countries such as Sweden and Finland, school does not begin until the age of 7.

There is much debate about the advantages of early literacy in “setting up” a child for later academic success, but evidence exists to suggest that the opposite is in fact often the case. As with all discussions around what humans ought to do, or not do, there are countless variables and each child is different. When things become systemised and institutionalised, outcomes occur, outcomes which might not have occurred should another path have been taken.

The problem seems to lie in the assumption that play based learning is not equal in value to academic learning, and thus begins a very long and complex discussion about what kind of world we want to create and live in as adults.

While early literacy may indicate to policy makers the promise of more industrious, productive adult citizens, there are many who would not agree, much less posit this as a reason to make the decision on the behalf of very young children, that their play time is no longer valuable to the Nation.

So, given the point of literacy as explained by the lovely Wikepedia,

Include (s) the ability to use language, numbers, images and other means to understand and use the dominant symbol systems of a culture.

There is indeed much room for developing literacy without the use of flash cards and repetition. Most teachers are aware that true literacy is a holistic outcome, but with busy workloads, large class sizes, and multifaceted responsibilities, it can be difficult for teachers to ascertain an intimate understanding of each child’s particular view of the world, and the ways in which this may be creating a detour in their minds.

If you are concerned or confused about your child’s literacy skills, it can be useful to observe their learning behaviours and approach literacy through a variety of learning styles.

The Theory of Learning Styles is fascinating and easily researched. There are three primary styles of learning, The Visual, Auditory, and Kinaesthetic, however, current models divide these senses even further into more complex divisions. An easy way to remember them is the commonly used: See it, Hear it, Do it.

The idea is that we all come to understanding things through different senses, and for most of us, a combination of various senses all at once. To be “concept” literate, might mean you understand the idea of a story, can answer questions about its meaning, and even apply higher order thinking skills such as imagining what might happen next. But you may not be quite so good at getting your head around why the word thought sounds the way it does.

Formal language can seem hostile and counter-intuitive at an age where children follow their intuitive senses rather a lot. Excitement, hunger, fatigue, joy, sadness…”ought says ort… what?!” What does that even mean?!

Sometimes, pushing children to digest the frequently nonsensical rules of language can damage a life- long love of this very nonsensical thing. And that would indeed be sad.

So! Try a different way. Or a combination of styles.

Auditory- My daughter reads aloud to herself.  We have come to realise this helps her to understand what she is reading. She also enjoys being read to.

physical activity. For some students, the idea behind a poem might best be introduced in a role play, and then anchored with writing, drawing, and speaking from there.

It helps having a husband who is prepared to wear a cape and a fake beard, to get the point across.

This is of course a simplistic overview of a much more complex approach. But worth looking into. It might not fast track your child up the home reader’s ladder by the end of next week, but there is very little chance that you and your children will not learn a great many things together along the way, big things, deep things, and even come to really love language.

Next time, a discussion on the value of Ecological Literacy for children, and questions about the presence of Financial Literacy in early learning models.

Anna O’Faolan is Author/Editor of The Lark- a magazine for children.