The Magic Of Words

Ever gotten to the end of a paragraph and realised you have no idea what you just read? Somewhere along the way, the thought pixies skipped in and tra la la la, each grabbed a corner of your mind and took off with it.

And while in the eyes of the person sitting next to you at the bus stop, you still hold exactly the same pose, eyes on the page, book in hand, you are actually no-where to be seen….. …

You still with me?

All this talk about literacy in recent posts, and to what degree we understand language when we read, reminds me of how often this happens to me these days. Even reading the school newsletter seems a struggle at times. I am reminded of those happy, happy days, BC ( before children), when my mind had not yet turned to applesauce, lying on the special University endorsed grass under a special University tree of learning.

What a luxury those days were, how heavenly to HAVE to read copious amounts of brilliant literature every week , from William Blake, to Jamaica Kincaid.. to …

Postcolonial literature was one of the most interesting and vast journey’s I ever began, and I only just got to the first turn in the road really. The course I took on Indian literature was particularly memorable. We got to watch very early  Black and White EPIC Indian  films that went for literally 4 hours at a time…we got to explore travel diaries… we got to read…

Well, parts of it anyway.

When I was a child I was routinely sent out of class during reading time to read on my own. There was nothing special about me I just found reading came easily. Thus began years of pats on the head for being able to read and write, and a sense of self worth that came to depend upon those pats on the head. This may explain my interest in literacy issues in recent posts, and how strongly I feel about the impact early reading experiences can have on young minds.

When it came to the Mahabharata, and the Ramayana , I was determined to read the texts set out for us.

Little did I know most of my peers would not make it to those particular tutorials, having been attacked by cats on their way to Uni, or had the wheels on their car stolen, so, hey what you gonna do… But keep reading…

I remember coming to a point with these texts where, I really couldn’t have repeated their meaning, in a literal sense, but reading had become like a mantra, I couldn’t put them down, the words just washed over me and kept pulling me back in. It was like a meditation.

The time I spent reading texts I didn’t always fully understand, when I should have been concentrating on selective studying, and just getting those essential essays in that attracted the highest percentile marks, cost me in the end, but that story is for another time. Suffice to say, I felt I had a duty to expose myself to the words, at least, or why was I even here, in this place of learning …at such great expense…

This feeling of reading as a meditation, as an energy, has always stayed with me- ( you can get this effect from attempting many texts, such as Finnegans Wake, if the Ramayana doesn’t grab you).

And by the end, you may not have caught the whole act, but you have more than likely glimpsed, as Dennis Denuto puts it so beautifully in The Castle..… the vibe of the thing ..

I read some Shakespearean Sonnets to my daughters the other night.

There was a solemn silence when I had finished..and then my youngest  daughter, Magnolia, started one of her own…about…cats..and grass…and cars…and whatever came out spontaneously, but it was delivered with such seriousness, and just the right tempo, as if the sonnets had cast themselves over her like a spell, and she suddenly spoke their language. It was magic.

In the first edition of The Lark Magazine,  a call was put out for a Rabbie Burns Challenge.

In a celebration of the spoken word, The Lark invited children, parents, friends, granny, people off the street, to try reciting the poetry of Robert Burns. 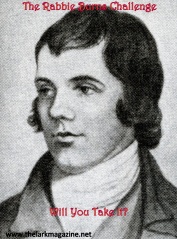 To take the challenge, all you have to do is stand on a stone, on a day so windy you can’t keep the hair out of your mouth and recite the poetry of Robert Burns. Get your dog, a passerby, or best friend to help you record your recital and send it in!

Robert Burns is particularly fun to recite. I sat with my older  daughter Nuala , who is 8, the other night and we had a go. It was truly the best fun we’ve had together in ages, and so fascinating how comfortable she was with it.

The rules were: No practice attempts- so- eyes on the poem for the first time ever, and off you go….and with all the strange language, the power of the Scottish, part old English, poetic obscurity and all,  Nuala was hooked. She would scroll down the list of poems and just pick one intuitively and off she went, until eventually I had to call bedtime.

We recorded about 15 poems in all. These recordings and others from friends and kids in the neighbourhood, will be on The Lark website soon, along with one from a delightful Glaswegian man named Jamie we met on the streets of Sydney.( He is particularly good).

The Rabbie Burns spoken word challenge remains open for anyone who is game!

So! As tempting as reading the 17 Reasons Not To Brush Your Hair This Morning  blog might be, keep curious and try different things, even if you feel at first like you are not entirely sure what is being said … for you this might be James Joyce, it might be Stephen Hawking, it might be One Direction-for me it’s The Financial Times..

Just watch out for pixies.